Soft Cell recorded a song that nicked its title from this book, a song about a man “who goes to Los Angeles and just sees how many people he can have in a weekend. It’s a soundtrack of loveless sex…”

“The hero is young, handsome, narcissistic Johnny Rio who, after three years away from the “scene,” is impelled, obsessively, to return to the city of Los Angeles, there to test himself anew in the arena of male love. Johnny,who is seen as an angel of dark sex, is like a retired boxer–an undefeated champion–who refuses to accept the possible ravages of time, and is led by some unfathomable force to return to combat once again. Combat, for Johnny, takes place in the dark balconies and dismal restrooms of the all-night movies in L.A. But these are only warm-up bouts; the real test, Johnny soon learns, will be in the shaded glens of a rambling park, on the outskirts of that sprawling metropolis. Through those shadowy alcoves, as a gallery of sexhunters emerges, he sets out to discover whether he is really still handsome and desirable, whether the passage of time–as terrifying to the male hustler as to the aging dancer or ingenue–has made visible inroads on that svelte and muscular body in which he has always taken such pride. His initial forays into the all-night theaters along L.A.’s strip and through the erotic beaches and at a synthetic motel have proven to Johnny that his sexual attraction is still great. But the final proof resides in numbers. In an effort to contain the threatening anarchy, he sets himself a rigorous time-table–ten days–and goal: thirty “numbers” to prove his mettle. Through all the sexual episodes, the self indulgence which comprises. Johnny Rio’s tawdry world, there resounds the universal cry of a human being’s desperate need to be loved.”
Evergreen Black Cat Paperback, 1968. 256 pp. Somewhat worn.
First edition thus. 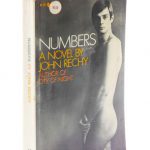