Expanding Space stands out as something unique in Per Nørgård’s oeuvre: dreamy electronic music with a cosmic scope. Nørgård is famous for his symphonies, chamber music and choral works, but Expanding Space is something very different: A radical and experimental synthesizer music, making use of both Nørgårds own algorithmic composition principle – the ‘infinity series’ – as well as field recordings of the surf of the Pacific Ocean.

Created mainly on a Roland Jupiter 8 synthesizer Expanding Space was recorded in Nørgård’s own home studio in Copenhagen on a 4-track tape recorder in 1985. The album was originally released in 1987 as a double cassette tape on the Danish label Fønix Musik, which has specialized in new age and meditation music since the early 1980’s.

From early on, Nørgård had an interest in spirituality and was inspired by new age thinking and philosophy, but Expanding Space is far from the typical conception of new age meditation music, and has much more in common with the music of fellow contemporary electronic composers like Morton Subotnick, David Rosenboom or Gordon Mumma – the latter having produced, upon Nørgård’s request, the recording of the Pacific Ocean, which features on Expanding Space. Moreover, the music has a much more free-flowing and improvised character than most of Nørgård’s more traditionally composed works. Fluctuating between these two modes Expanding Space sums up an aesthetic philosophy, that had shaped Nørgård’s work since the 1960’s: A music without rhythm, melody or harmony, that demands a more meditative, open-minded mode of listening; a music outside time, seeking to expand the inner (and outer?) space.

Per Nørgård’s own original notes for Expanding Space:

“These electronic pieces touches the meditative element of music, but more in a non-rhythmic (or free rhythmic) than a pulsating, minimalistic way. The music is often ‘streaming’ and the association to water is obvious, especially in “Najads”. Sometimes a sound recording of water (from Santa Cruz by the Pacific Ocean) is integrated, but most of the time different kind of ‘water music’ and ‘water sounds’ are composed and recorded by me, via different electronic and acoustic instruments in my own studio.

The idea is a music that could give a meditative experience, but also a music that could be used as ‘ambient’ or ‘background music’, without the disturbing elements – like in muzak and elevator music – of small discreet themes calling for your attention, but doing nothing with it… ”

To this day Expanding Space remains largely unknown. The unexpected nature of the music issued on cassette by a new age label made the work slip into the shadows. With this release we hope to shine a light on an incredible piece of cosmic electronic music – oscillating somewhere between new age and classical – from one of the most significant composers of our time. 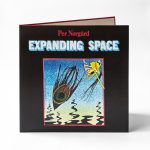