Warhol, Andy:. a: A novel by Andy Warhol. FIRST EDITION PAPERBACK VERSION. New York: Grove Press, Inc., 1968. Paperback with all edges red as issued. 451 (1) pp. Only minor wear to extremities else clean and overall a very good well preserved copy.
First edition, first paperback printing (stated) of Warhol’s first novel, an experimental collection of four word-for-word transcriptions of tapes recorded by Warhol and Ondine between 1965 and 1967, Warhol’s response to James Joyce’s Ulysses, that follows an uninterrupted twenty-four hours in the life of Ondine, an actor who was famous mostly as a Factory fixture, Warhol film superstar and devoted amphetamine user

Warhol hired four typists (including Maureen Tucker, the drummer for the Velvet Underground and two high school girls) to transcribe audio tapes of conversations between him and Ondine between 1965 and 1967 and the book is a verbatim printing of the typed manuscripts, containing every typo, abbreviation and inconsistency that the typists produced from the twenty-four tapes (each chapter is named for its respective tape and side, from ‘1/ 1′ to ’24/ 2’)

In his glossary for the 1998 edition of a, A Novel, Victor Bockris cites Billy Name, the book’s editor, as the source for the title; “a” refers to both amphetamine use and as an homage to e.e. cummings. a, A Novel was the second of several publishing projects Andy Warhol produced in his lifetime. Warhol wanted to be a writer but much like his film work, spontaneous performances and an explicit lack of editing was used as a device. Warhol wanted to write a “bad” novel, “because doing something the wrong way always opens doors.”

Four typists were employed to transcribe the Warhol/Ondine tapes. Maureen Tucker, the drummer for the Velvet Underground was an expert typist. However, she refused to transcribe the swear words and left them out. Two high school girls were hired to work on some of the tapes. When one girl’s mother heard what they were listening to she threw out the tape, losing several hours of conversation. All four hired typists transcribed the dialogue differently, some identifying the speakers, others not. The editor for a, A Novel, Billy Name, preserved the transcripts as is, with every typo and inconsistent character identification, and even moving from two column pages to single-column based on each typist’s style. The final printed version was identical to the typed manuscripts. The book is a roman a clef, meaning that the fictional characters are thinly disguised actual persons. The “cast” is itemized in the glossary written by Victor Bockris in the 1998 paperback edition. A run-down of the major characters in the book are: Ondine is Robert Olivo, a Warhol superstar. Drella is Warhol himself (he was nicknamed by Lou Reed as “Drella” because Reed felt it fit both sides of Warhol’s persona, being a combination of Cinderella and Dracula).Steve is Stephen Shore, a photographer who worked with Billy Name.
Paul is Paul Morrissey, who had just joined the group and would eventually become the director of Warhol’s later films. Lucky L is Paul America, newly popular in the Factory crowd for starring in My Hustler. Gerard Malanga was the star of many Warhol films, and is the only person whose real name is used in the book. Taxine or “Taxi,” is Edie Sedgwick, the great female Warhol superstar. A, a novel was the beginning of the end of their relationship. Ingrid is Ingrid Superstar, a Warhol Superstar, who was brought to the Factory to “replace” Edie in late 1965. Rink or “Rink Crawl” is Chuck Wein, responsible for bringing both Edie and Ingrid to the Factory. Irving Du Ball is Lester Persky, a film producer. Moxanne is Genevieve Charbon, a French actress who Edie met in Paris that year. Rotten Rita is Kenneth Rapp, who, with Ondine and Billy Name, made up the “A-heads Trio.” Rita was also known as the Mayor, like Ondine was known as the Pope. The Duchess is Brigid Polk, whose real name was Brigid Berlin. She would be Warhol’s companion for the rest of his life, although he did not take part in her only conversation in the book. Billy Name is Billy Linich, a photographer who worked closely with Stephen Shore. He was also the designer of the Factory. Do Do or “Do Do Mae Doome,” is Dorothy Dean. She worked at The New Yorker in the 60s. The Sugar Plum Fairy is Joe Campbell (actor) who starred in My Hustler and Nude Restaurant. Ron Via is Ronnie Vial, a member of the underground. Oxydol is Olympio Vasconzalez, who starred in Conquest of the Universe with Ondine. Lou is Lou Reed of the Velvet Underground, whose album cover Warhol created 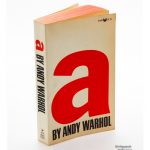