Pasolini’s posthumously published novel Petrolio tells the story of a man who turns into two men (Carlo 1 & Carlo 2), who in turn, as the story progresses, become something like a woman (qualcosa come una donna). The novel was left unfinished at the time of his murder in 1975, and is Pasolini’s last major work. All of Pasolini’s major themes are here – the homoeroticism of working-class males, the reemergence of ancient myth in the modern city, and the exploitation of the underclass by capitalism. Pasolini blends these disparate themes together in a dense, but satisfying tale of social corruption, political intrigue, and personal sexual salvation. Deeply intellectual and at times mystifying – often because it was partially reconstructed from notes – Pasolini’s final work is a tribute to both his power and endurance as an artist.

From the books jacket “At the novel’s center is Carlo, an oil executive who undergoes a profound personality split: Carlo 1 is a super-Machiavellian power monger; Carlo 2 lives only to satisfy his perverse and insatiable sexual desires. Carlo also experiences a sexual metamorphosis in which he becomes, at will, female. The story of Carlo is interspersed with re-visions of myth – Oedipus, Medea, the Argonauts – and of Dante’s hell.” “The teller of this story is also dual in nature. There is the author – the external shaper of the novel – who interrupts the text to comment on its mechanics and its meaning. And there is the narrator, whose cynical and seductive perspective comes from within Petrolio’s fictional world.” “Fragmentary, deliberately self-referential, meta-literary, schizoid, a devotional exploration of the male libido, an ode to the lust for power and the power of lust and, above all, a wrenching attempt to define the intellectual and his responsibilities” 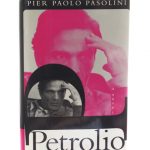