Winner of Two Awards The Most Beautiful Swiss Books of 2014 and Best Book Design from all over the World 2015″. –

Over 1000 pages long, this comprehensive, elaborately bound artist’s book documents “Volumes”, Paul Chan’s work consisting of 1005 book covers, a selection of which was exhibited at documenta 13 in 2012, and which now belongs to the Emanuel Hoffmann Foundation’s collection. In 2014, it was shown in its entirety for the first time as part of the exhibition “Paul Chan – Selected Works.” For each book, Paul Chan removed the book block from the cover and then individually overpainted it. For “New New Testament”, Chan has written texts, which are juxtaposed with the individual picture pages. These texts draw on a wide spectrum of writings, from the philosophical, art theoretical, and the literary to the trivial, and the artist has also interwoven them with playfully ironic character sets 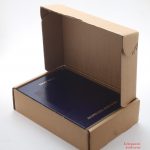