First edition. “Le Corbusier, the most influential architect of the twentieth century, died in 1965 only weeks after completing Mise au point, his last opus in the form of antobiographical reflections. Published posthumously, Mise au point is a curious and cryptic text, yet it sheds an important light on the great artist’s mind and temperament. This book is the first English translation of Mise au point, the first illustrated critical bilingual edition, and the first attempt to integrate this document into Le Corbusier’s life as a whole, especially its final embittered years. In an insightful introduction and in annotations, Ivan Zaknic shows how the themes of the text echo the contradictions of Le Corbusier’s personality: determined to rebuke society and yet constantly courting its approval; devoted to serving the public and yet returning again and again to a solitary monastic ideal; distrusting professional institutions, the academy, and the government and yet stung by their willingness to pass him by. Zaknic links the themes of this text with Le Corbusier’s passion for certain literary works, especially Don Quixote, and emphasizes the architect’s many philosophical formulas for coming to terms with death—first that of his beloved wife and then his own. Illustrated with photos and drawings, many of which appear here for the first time, and also including a revealing interview granted by Le Corbusier in the final months of his life, the volume will be welcomed by all students of Le Corbusier’s art, architecture, and urban planning, as well as by those interested in modernism and twentieth-century culture.” 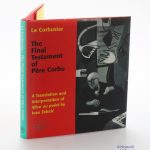