Henri Michaux. Særudstilling af Silkeborg Museums samlinger, 1962-63. Med forord af Asger Jorn. Silkeborg Museums Samlinger, 1962. Gennemillustreret. 120 sider. Hft. Grafisk tilrettelagt af Asger Jorn med forord af denne.
Små brugsspor.
First edition of this very fine, profusedly illustrated, exhibition catalogue arranged by Asger Jorn: Asger Jorn was fascinated by Michaux’ s art and the characters and symbols in Michaux’s work and donated a considerable number of his works to Museum Jorn, Silkeborg. On several occasions Jorn bought drawings by Michaux, which – in the 1950s – had not yet attracted much attention and were therefore affordable. Asger Jorn wrote on Michaux: “Language is the most useful set of symbols a human being has at his disposal if he wishes to communicate. But its very unambiguousness limits its artistic wealth of expression unlike, for example, that of music. Michaux has created tremendously musical poetry. But that has not been enough for him. He came up against one of the problems, which is perhaps the most intolerable problem of all in today’s culture. The limits of language dividing people. He made a conscious decision to cleanse his poetry by turning to the creation of a graphic poetry, a picture idiom, where letters or characters are not bound to concepts that risk limiting poetic flow. The reason I choose to put so much emphasis on the “letters” or symbols that Henri Michaux has created, and find his work so fascinating is that – in my opinion – they reflect a very special form of humanism … In Michaux’s humanism, man is artistic, Faustian, demonic divine, homo ludens, a great player, a human being who embraces all other human beings from the beginning of time, in the history of man, a human being who calls nothing “inhuman” that has been done, thought or said by humans – a human being who opens all doors.” Monod II, 8124.
This copy near fine, with a fold down the first (blank) page. Overall well preserved. 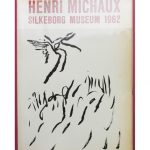