“Compiled by Fluxus artists Wolf Vostell and Dick Higgins, and first published by Higgins’ legendary Something Else Press in 1970, Fantastic Architecture anticipated the critiques launched by a new generation of visionary architects in the 1970s. In his introduction, Higgins argued that “architects … have only just begun to escape from the drawing board mentality,” and articulated the need for “creating space, which may or may not be functional, but which is at least relevant to the sensory environment in which we live. The economics of building has led to an aridity in our experience which is not consistent with the richness of our time.” Against this, Higgins and Vostell advocate the approach of polymath artists such as Kurt Schwitters, Raoul Hausmann, Erich Buchholz, John Cage and Buckminster Fuller. From their contemporaries and friends, artists such as Carolee Schneemann, Ben Vautier, Richard Hamilton, Douglas Huebler, Lawrence Weiner, Dennis Oppenheim, Jan Dibbets, Jean Tinguely, Robert Filliou, Daniel Spoerri, Geoff and Bici Hendricks, Philip Corner, Joseph Beuys, Ay-o, Claes Oldenburg and others also made contributions, which range from the visionary to the absurd to the political, from the epistolary to the outright manifesto. Joseph Beuys submitted a recommendation to raise the height of the Berlin Wall; Claes Oldenburg’s proposals included a colossal replacement for the Washington Obelisk and a monument for war heroes. Vostell and Higgins considered it the artist’s responsibility to research and revolutionize structures in space, recognizing that artists could reconceive buildings without the bureaucracy of government and urban planning. The missives and artworks made for this book show how much visionary architecture was intertwined with all facets of culture and critique. Fantastic Architecture is a prime example of a 1960s Fluxus artist’s book and of imaginative cross-media thinking.” 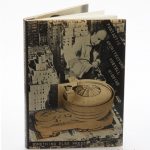