Very fine introduction to the hard-boiled tabloid photographer Weegee. From the 1930s to the 1960s his images of murder, mayhem and the seamy inderside of New York set a new standard and influenced a generation of of imitators in black and white street photography. Working with a Speed Graphic and an on-camera flash, he shot in a stark, punchy, in-your-face style, often capturing his subjects in a startling blast of light. This retrospective showcases his jolting work – and captures bygone New York at its most raucous, dangerous and outrageous. Here are Weegee’s grisly murders, shocking accidents, gawking crowds and other signature crime-and-disaster shots, along with his equally arresting human interest and high society images – 265 images in all. The volume includes interpretive essays, an annotated chronology and other documentation. 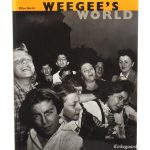