Catalogue most probably designed by Hajnal Lengyel-Pataky, the wife of Kálmán Lengyel the partner of Breuer at Thonet The “Cover” shows Marcel Breuer Club chair (model B3, the Wassily). One folded sheet – a booklet that can be unfolded and is printed on both sides. Printed in black and red. Fragile item, some wear to folds and edges with small splits at folds and small tears but complete and all in all well preserved

Leopold Pilzer, a junior partner at the bentwood furniture company Rudolf Weill & Co., merged sixteen smaller bentwood furniture manufacturers to create the limited company Mundus in Vienna, Austria, in 1907, with assistance from the Austrian Creditanstalt bank. In 1914 Mundus became a majority stakeholder in J. & J. Kohn, and merged with Gebrüder Thonet in 1922 to form the publicly traded company Thonet-Mundus. Even after the merger, some of their furniture was sold under their respective names. After purchasing smaller manufacturers in Berlin – such as Standard Möbel in 1929 and Desta in 1932 – the firm, which had produced only bentwood furniture, now had the rights to produce tubular steel furniture: this resulted in a French-German tubular steel collection (see Thonet Frères). Leopold Pilzer headed the company, which had more than 10,000 employees. In 1938, Pilzer and his family, who were Jewish and therefore feared persecution by the Nazis, emigrated to the United States, where Pilzer founded Thonet Industries. Consequently, the firm’s branches in various countries were turned into individual companies: Thonet Frères in France, Gebrüder Thonet Vienna in Austria, and Gebrüder Thonet in Germany. Uhlíř, Jiří, Vom Wiener Stuhl zum Architektenmöbel. Jacob & Josef Kohn, Thonet und Mundus Bugholzmöbel vom Secessionismus bis zur Zwischenkriegsmoderne (Vienna: Böhlau, 2009). 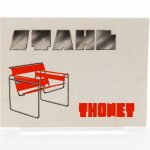