Very special copy boldly SIGNED to free front endpaper by Ruth Berlau, Brecht’s Danish lover, working for him and with him as secretary and manager.
Ruth Berlau (1906 in Denmark-1974 in East Berlin) was a Danish actress, director, photographer and writer, known mainly for her collaboration with Bertolt Brecht and for founding the Bertolt-Brecht-Archiv in Berlin. Born to a merchant family, she learned French at a convent school, but had to drop out due to a pregnancy at the age of thirteen. She studied acting and established her Danish reputation playing Anna in Brecht’s Drums in the Night. During her teenage years, she financed a bicycle tour of France, by writing up a somewhat fictionalized account of her travels for a Danish newspaper. In 1930, she toured the Soviet Union by bicycle, and on her return joined the Communist Party of Denmark. Later she took part behind the front lines in the Spanish Civil War. In 1933, she presented herself to the newly arrived Brecht and his wife Helene Weigel, then staying on the island of Fyn and within two years had become his lover. In 1936 she divorced the doctor Robert Lund and threw herself into a collaboration with Brecht, acting as a secretary as well as writing, translating, photographing and directing. With Brecht, Berlau published the short story collection Jedes Tier kann es, considered obscene in its time. In 1940, she followed the Brecht clan to Sweden, Finland, the USSR and finally to the United States, where a rupture with Brecht took place in 1944. In New York she gave birth to her only child, who was premature and only lived for a few days. After the war, she followed the Brechts to Berlin, but was blacklisted from the Berliner Ensemble by Weigel after Brecht’s death in 1956. She died in the Charité hospital after setting her bed alight with a cigarette. 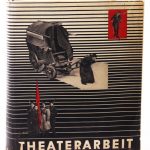