“Kampen om Byggeren – genfortalt i billeder” (‘The Battle for ‘Byggeren’ – recaptured in pictures’). Copenhagen: Informations Forlag, 1980. 4to. Original photoillustrated softcover as issued. 160 pages, illustrated throughout with high contrast black and white photographs by a large number of famous Danish photographers like Morten Bo, Henrik Saxgren and others

“In late April 1980, the police first cleared the playground area Byggeren amid violent protests from residents and activists. This led to a time of unprecedented fighting between police and citizens in Nørrebro. Barricades were built on both Åboulevard and Nørrebrogade – and for several weeks the area was under a state of emergency. In 1980, Morten Langkilde was one of the younger members of Politiken’s team of photographers and spent almost 24 hours in the conflict zone. “At the time, I had never seen anything like it. That kind of fighting. In Copenhagen. It was quite extreme,” he says. Since then, the case of the Builder has often been called the start of the bz movement. At the time, the media was busy reporting that the fighting in Nørrebro was fought by ‘spoilt leftists’ and ‘left-wing provocateurs’. But the truth was that it was the whole of Nørrebro that was fighting. Parents, educators, shopkeepers, even ordinary citizens. One was tired of the unplanned redevelopment and the decisions that were made. The actual fight took place around 1 May 1980. But in reality the fight already began on a Sunday in 1973, when a lorry drove into a building site. A very popular construction playground emerged. In June 1977, the municipality decided to close the six-year temporary institution in Todesgade. On 15 August 300 officers showed up. But they were stopped by 1,000 local residents. After several months of occupation, the residents reopened the institute. But on 10 January 1978 the police showed up even more numerous together with several craftsmen.” (Luciano Zuccaccia) 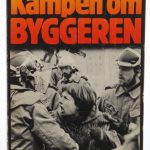