“Through the story of the pioneering photographer Eadweard Muybridge, the author of Recollections of My Nonexistence explores what it was about California in the late 19th-century that enabled it to become such a center of technological and cultural innovation. The world as we know it today began in California in the late 1800s, and Eadweard Muybridge had a lot to do with it. This striking assertion is at the heart of Rebecca Solnit’s new book, which weaves together biography, history, and fascinating insights into art and technology to create a boldly original portrait of America on the threshold of modernity. The story of Muybridge–who in 1872 succeeded in capturing high-speed motion photographically–becomes a lens for a larger story about the acceleration and industrialization of everyday life. Solnit shows how the peculiar freedoms and opportunities of post-Civil War California led directly to the two industries–Hollywood and Silicon Valley–that have most powerfully defined contemporary society.”

A biographical portrait of photographer and inventor Eadweard Muybridge, a history of the development of technological change in the West during the later half of the nineteenth century that led to development of the modern film industry in Hollywood and later the information technology industry in Silicon Valley, and an essay focusing on a series of connections between Muybridge’s life and the changing human landscape of the American West. In an interview with PBS, Solnit explained that Muybridge was born in 1830, the same year the first passenger railway ran in England and thus his life spans from the birth of the railroad through the birth of aviation technology. Muybridge’s life story itself seems to hinge on three major crises: his carriage accident, his murder of his wife’s lover, and his break with patron Leland Stanford. At the same time, his lifespan is also situated in a period and place during which the world around him was changing rapidly and, Solnit argues, in which human experience of time was also changing as a result of new technology. In 11 chapters, Solnit examines how the telegraph, the railroad, photography, and the science of geology all changed how humans understood time and situates Muybridge’s role in history and his technological innovations within this context 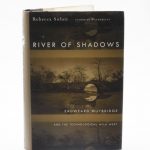