“Photographic images and the typography and layout of the book are outstanding. Photographs of the furniture by Keld Helmer-Petersen form a large central section of the book. Helmer-Petersen produced photographs for Kjærholm and they worked together on several exhibitions that included very large black-and-white images of landscape and urban views by the photographer. The text takes the form of separate and independent essays. These provide an overview of the life and work of the designer with important insights into his approach to design and his methods of work and the essays assess the development of his ideas and theories. All the contributors knew or worked directly with Kjærholm. The foreword to the book is by Jørn Utzon who taught Kjærholm and then there are five separate essays and a ‘conversation’ or interview by Axel Thygesen and Arne Karlsen with Poul Kjærholm from 1963. In the first essay, Architect and Furniture Designer, Erik Krogh identifies an important and intriguing division in the furniture designs between sculptural forms, such as the extraordinary chair made of two shells, and the disciplined and restrained architectural pieces that reduce chairs to a series of flat planes.Kjærholm’s control of space is discussed further in the section on Exhibitions and Special Spaces by Nils Fagerholt that includes photographs of a room setting for the Museum of Applied Arts in Trondheim from 1952; the displays of his own work that Kjærholm designed in galleries and showrooms in Copenhagen; and exhibitions in Milan, Montreal and Paris where, generally, his furniture was set out within a grid defined by large photographs that formed screens and by simple large rugs and by a precise use of lines of pendant lights to reinforce the division of larger space into smaller, simple and clearly-defined areas. An important essay by Ole Palsby – Setting a Standard – explores the role of Ejvind Kold-Christensen in the development, manufacture and promotion of the designs by Kjærholm. Ulf Hård af Segerstad in the essay Poul Kjærholm – An Architect, Not a Designer reinforces the view that the furniture has to be assessed in terms of the space it occupies and Christoffer Harlang in Lightness and Weight puts the works by Kjærholm within the broader context of Danish architecture in the 1950s and 1960s. Finally, there is a succinct biographical resumé and then a full list of designs by Poul Kjærholm from 1948 through to 1980 that are arranged chronologically and includes designs that were not put into production” 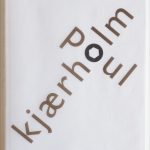