Revised, enlarged and updated edition.” In every generation of artists, there are a few who propose a new set of ques- tions and alter the way we understand art. Peter Doig is such an artist. This handsome monograph considers the painter’s entire career, beginning with the early work produced in the 1990s when Doig’s enigmatic but wholly new conception of painting was first introduced to audiences. Doig was born to Scottish parents, spent several years as a child in Trinidad, later settling in Canada for his formative early teen years. He found his voice while at art school in London, albeit one that was out of step with the work of the time (much of it installation-based and dripping with neo-conceptualist leanings). He had developed a small following of fellow artists and critics when the rest of the art world caught up and took notice. In 2002, he left London for Trinidad, where he has remained. The small Caribbean island-with its own distinctive light and landscape-has deeply influenced his recent work. This volume was designed in close collaboration with the artist, with a cover and various interior elements created especially by the artist. 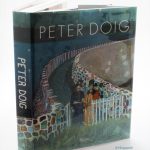