“Muhammad Ali, Zurich, 26.12.1971 shows the iconic American smooth-talking rhymester-boxer before and during his prize fight in Zurich against German heavyweight Jürgen Blin on December 26, 1971. Hans-Ruedi Jaggi, a Swiss hustler and promoter, succeeded in bringing the champ to Zurich for the fight. At Zurich’s Playboy Bar, Jaggi made a bet with Jack Starck, a society reporter for the Swiss tabloid Blick, for a bottle of Ballantine’s that, after having already got Jimi Hendrix and the Rolling Stones to give concerts in Zurich, he would now lure the mighty Muhammad Ali to town for a fight. He subsequently flew to the States three times but couldn’t get an “in” with Ali. Eventually he made it through to Ali’s Black Muslims. When asked by the clan’s spiritual leader Herbert Muhammad, “What’s with the dough?” he pulled $10,000 — pretty much all the money he had at the time — out of his silver ankle-boots and a preliminary deal was promptly signed and sealed on a sheet of hotel stationery. Zurich photographer Eric Bachmann accompanied Ali during his ten-day stay, on his winter jog through Zurich’s woods or buying shoes in a working-class neighborhood, going through his training drills and, finally, during the big fight, which rapidly climaxed in the seventh round when he knocked out the blond German giant Jürgen Blin. Muhammad Ali, Zurich, 26.12.1971 documents the events in brisk chronological order, as befits a boxer who “floats like a butterfly, stings like a bee,” in a rapid-fire succession of impressively intimate and humorous shots against the placid urban backdrop of mid-’70s Zurich. The book is richly illustrated with a great many facsimiled boxing match program pages and newspaper clippings” 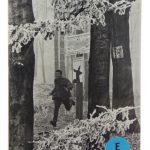