Not unlike Sam Haskin’s Cowboy Kate this is a highly iconic 60’s photobook and a graphic masterpiece and finely printed: a real delight from first to last page. “In Mirror of Venus Wingate Paine created an icon of the 1960s Sexual Revolution

Mirror of Venus gave the world a glimpse into a private realm that was both elegant and earthy, both sexy and pure. Paine viewed his models with appreciation and respect, as well as desire. Paine’s women stand on the threshold of 60s’ feminism. One foot remains in the sexist realm of men (as expressed in the text of Fellini), while the other foot enters a more empowered women’s sphere (given voice by Sagan). Paine succeeded in his ambition to produce a modern erotic classic, true to his time. And it is still graceful in ours. Mirror of Venus has influenced several generations of photographers. They have imitated Paine’s graphic ideas and elegant desires. Paine was one of the hottest advertising photographers in New York in the 1960s, commanding fees bested only by Avedon and Penn. He was the photographer of the iconic Volkswagen Beetle ads, considered a touchstone of modernist print advertising. In the mid- 1960s Paine set aside his successful advertising career to devote himself to his magnum opus, Mirror of Venus, which he described as a “confirmation of my feelings toward beauty and beautiful women.” After finishing Mirror of Venus and overseeing its many editions, he retired from photography and became a spiritual teacher” (Steven Kasher). The paperback version (s) is graphically extremely wellmade, maybe even better than the original hardbound version 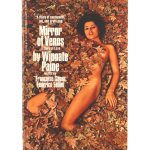