Lloyd Kahn, former shelter editor for the Whole Earth Catalog and publisher of Domebooks One and Two, travelled across America, Ireland and England over a two year period researching alternative ways to build, the results of which appear in the books Shelter and Shelter II, publications that made his reputation. Assembled with the assistance of numerous contributors it includes an historical survey of shelter and the evolution of simple building types: tents, yurts, timber buildings, barns, small homes, and domes, along with a section on building using natural materials, including heavy timber construction and stud framing, as well as stone, straw bale, adobe, plaster, and bamboo. Now regarded as a counterculture classic, and a forerunner of the contemporary interest in cabins, do-it-yourself building and off-grid living 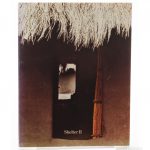