Kathy Acker — GET RID OF MEANING

American author Kathy Acker was one of the most influential writers of the 20th century. Working through an experimental and avant-garde tradition, she wrote numerous novels, essays, poems, and novellas from the early 1970s to the late 1990s. As a postmodernist, plagiarist, and post-punk feminist, she continues to inspire generations of writers, philosophers, and artists. The book GET RID OF MEANING, edited by Anja Casser and Matias Viegener, is the first comprehensive publication on Acker’s work from an artistic and literary perspective. It includes previously unpublished material from Acker’s personal archive and other collections. The publication is the compilation of a multipart research project including an exhibition and a symposium at Badischer Kunstverein in Karlsruhe

Centered in a 1:1 format on Acker’s notebooks for Blood and Guts in High School, GET RID OF MEANING allows readers and researchers to immerse themselves in a conversation between Kathy Acker’s work and her readers, commentators, and heirs

An essential compendium on the work, life and legacy of the transgressive autofiction pioneer 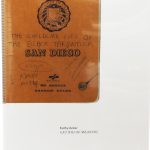 Kathy Acker — GET RID OF MEANING