A sumptuously produced introduction to the ideas and methods of one of the most influential artists and theorists of the twentieth century. First issued in 1972 as a strongly limited edition set of prints, Formulation: Articulation was 2006 published in book form for the first time. Josef Albers drew on over forty years’ work in a variety of media—woodcuts, sandblasted glass pictures, and oil paintings—for these poetic explorations of color and form. Created just four years before his death in 1976, the images can be seen as the summation of Albers’s creative life. Albers was a student and a teacher at the Bauhaus from 1920 to 1933, escaped to America and taught at Black Mountain College until 1949, and was chairman of the Department of Design at Yale University until 1958. As both artist and teacher he influenced innumerable artists, including Mark Rothko, Barnett Newman, and Robert Rauschenberg. Albers’s seminal text, Interaction of Color (1963), which was translated into eight languages, affected art teaching all over the world. This book embodies all the elements of Albers’s lifetime preoccupation with abstraction, color, and perception. He draws the viewer into a dynamic relationship with his work, showing how color can have deceptive and unpredictable effects, depending on how it interacts with other colors. The order of the 127 illustrations was carefully chosen by Albers so that they can be examined and appreciated for their visual interaction or as beautiful works of art in their own right. They appear alone on the page, in pairs, or sometimes four together. The accompanying text includes key passages from Albers’s own writings, printed on special foldout sections, and the introduction by noted critic T. G. Rosenthal includes comparative and contextual illustrations 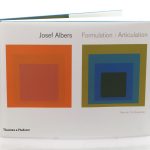