New York: GROVE PRESS INC., 1961. Bound in the two original black clothed hardcovers with titles in red and gilt. 346 & 321 pages. Clean, white pages and a only bit of shelf wear to cloth covers. No dustjackets.

Tropic of Cancer  Henry Miller’s masterpiece, was banned as obscene in the USA for twenty-seven years after its first publication in Paris in 1934. Only a historic court ruling that changed American censorship standards, ushering in a new era of freedom and frankness in modern literature, permitted the publication of this first volume of Miller’s famed mixture of memoir and fiction, which chronicles with unapologetic gusto the bawdy adventures of a young expatriate writer, his friends, and the characters they meet in Paris in the 1930s. With Introduction by Karl Shapiro, and Preface by Anais Nin.

Tropic of Capricorn is the companion volume to Miller’s Tropic of Cancer and chronicles his life in 1920s New York City. Famous for its frank portrayal of life in Brooklyn’s ethnic neighborhoods and Miller’s outrageous sexual exploits .

Both books were banned in America for almost thirty years because of its explicit sexual content These are early US editions, maybe first trade printings, and often copies of these are labelled First edition, since no other date appears than 1961. A fine set! 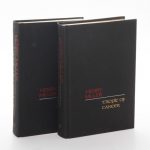