Sides B, C and D are part of “Headlines” from the then in progress “Atalanta” (Acts of God)” and were written for and dedicated to Tatò and Quartucci 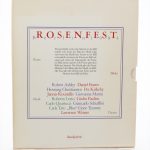