Documentary photography in one of its most classic, iconic moments: Erich Lessing “I think we should record whatever we see, whether we like it or not,” wrote Erich Lessing, one of Magnum’s earliest members. Revered for his ability to capture fleeting moments of history, his documentation of the Hungarian Revolution is unparalleled in both its scope and power. The first photographer to arrive in Budapest where the revolt began, Lessing stayed to photograph its duration and aftermath. The photo-essay was a defining moment in his photographic career, however the extent of the suffering he witnessed also caused Lessing to question the purpose of war photography and he went on to steer clear from documenting conflict for the rest of his life.”. Soon after the end of World War II, the Soviet Union seized control of defeated Eastern European countries and enforced Communist rule. In Hungary, growing discontent across the county at both the occupying Soviet forces and the activities of the ruthless, home-grown Hungarian secret police, known as the AVO, culminated in an uprising on October 23, 1956, during which thousands of Hungarians in Budapest took to the streets demanding political reform. From members of the intelligentsia and students, to factory workers and soldiers, the freedom fighters represented a cross-section of society, united in their animosity towards Soviet rule. Within days, the protest had garnered the support of millions and the Soviets were gradually forced to retreat back across the border for a few weeks. By mid-November however, the Russians had launched a brutal counter-attack and regained control, resulting in the deaths of 3000 Hungarian citizens and forcing 250,000 people to flee the country.The photographies by Rune Hassner and Erich Lessing’s and others expose the brutality of the uprising to a degree that had not been seen in photography since the documentation of the American Civil War in the 1860s and would not be seen again until images of the Vietnam War emerged just over a decade later 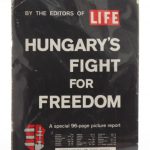