Eleanor Antin’s 100 Boots was a conceptual series of postcards depicting black rubber boots displayed across the American landscape. Antin arranged the 50 pairs of boots as different scenes in each postcard to collectively form a picaresque novel. In the spirit of Fluxus, she mailed the postcards to artists, curators, dancers, critics, and writers from 1971-1973. Antin’s gesture of using the postal system to disseminate “mail art” functions as a critique of the art world, the distribution of artworks, and the economy of the art market. The postcards, boots, and photographs were later exhibited in 1973 at the Museum of Modern Art. While the exhibition largely functioned as an institutional critique, it also sought to challenge historical definitions of the “art object.” Subsequently, Franklin Furnace curated the exhibition 100 Boots: The Transmission and Reception (1979), which included a postmarked set of the series and unpublished notes Antin received from postcard recipients.

Introduction in the book by Henry Sayre, and a brief statement by Antin “Remembering 100 Boots 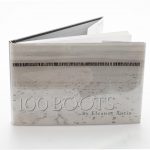