“Although known for his paintings and drawings, California artist Ed Ruscha has also attracted critical attention for his photography. (…) Ed Ruscha, Photographer, depart from earlier books to explore how the artist`s different disciplines – painting, drawing, printmaking, and photography – are guided and shaped by a single vision. Ruscha`s relationship to photography is complex and ambivalent, and the work is difficult to define. He has referred to this photography as a “hobby” but from the outset it has drawn considerable critical interest. the small books of photographs that ruscha produced in the sixties and seventies earned him a reputation as an underground artist among his peers, and have influenced subsequent generations of artists in Europe and North America. The photographs were snapshot size, with an amateurish quality that intrigued his contemporaries. Neither purely documentary nor solely artistic, their subject matter was stereotypical and bnal, with motifs drawn from sites in Southern California or the western United States. This, combined with their serial presentation, created a mythical road-movie or photo-novel effect with Beat Generation innuendos and inspired interest among artists at a time when serial logic was prominent in Pop art and Minimalism, and later in Conceptual art. This Volume, “Ed Ruscha, Photographer”, is produced in cojunction with a traveling exhibition to be shown in Europe in 2006, organized by The Whitney Museum of American Art, New York. The exhibition photographs have been selected from the collections of the Whitney and the artist by independent curator Margit Rowell, who is also the author of the publication.” (from the publisher). Ed Ruscha was born in Omaha, Nebraska in 1937 and grew up in Oklahoma City, Oklahoma from 1941 to 1956. He moved to Los Angeles, California and attended Chouinard Art Institute from 1956 to 1960. His work has been exhibited internationally and is represented in major museums and private collections throughout the world. In 2001, Ruscha was elected to The American Academy of Arts & Letters as a member of the Department of Art. He was chosen by the U.S. Department of State to represent the United States at the 2005 Venice Biennale. Ed Ruscha is famous for excellent artist and photo books like Twentysix Gasoline Stations, Various Small Fires, Some Los Angeles Apartments, Thirtyfour Parking Lots, Some Los Angeles Apartments, Nine Swimming Pools and A Broken Glass and Every Building on the Sunset Strip.” 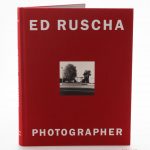