Paris: Maison Europeenne de la Photographies, 2007. Large 4to in hardcover with original dustjacket. Unpaginated, illustrated with photos in color throughout. Near fine copy, clean and with only most minimal superficial edgewear

“Tell me what you discard, I’ll tell you who you are.” : This long-term project took many years to find the most irreproachable legitimacy beyond their first publications in Paris Match. Fortunately, mentalities have evolved since then and the relevancy of their message is now the most inarguably contemporary, both artistically and politically. Their “still lifes” of vintage advertisements and brands elegantly arranged against a velvet background give these contemporary “herbariums” their full importance. They can also be considered individual or collective portraits of their owner-depositaries… through their garbage. Their concept began in 1988 with Serge Gainsbourg’s trashcan, Rue de Verneuil, like a thumbing of the nose to “the man with a cabbage head” that became an unintentional caricature: cigarette butts, old bottles, letters, and newspapers of all kinds. This was just the beginning of what was to become an incessant professional inquiry, first in Paris and that would later take them from Hollywood to Moscow, from Reagan to the poor of Malawi, from Madonna to Jack Nicholson; on an uncompromising mission that nonetheless avoided degrading intrusion as much as it did the control of a higher authority or of the presumed waste-creators. Scientific samples that are also ethical in the sense that they respect the individual, the large formats by Mouron et Rostain are grand frescoes of the history of our civilisation, exposed in the stomach if not in the temple of consumerism. With their large-format images, words are superfluous since the eloquence of the images is meticulously constructed thanks to the quality of the print, the mastery of the organisation and composition, to their perfect knowledge of the vocabulary of the design and packaging, to the rigour of the scientific exposé and the neutral lighting” 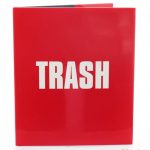