André Gelpke (b 1947 ) is a German photographer living in Zurich, considered one of the most important photographers of post-war Europe. Gelpke studied photography with Otto Steinert at the Folkswangeschule in Essen. “8…) Andre Gelpke creates in his photographs vibrant, arresting images by offering an abundance of information. Precisely composed and perfectly framed for the composition at hand, his rich black-and – white pictures freeze time into intense images which, because of the absence of time and movement, can seem overwhelming, even alienating. Whether it is capturing a playground frozen into a timeless frieze of human and architectural forms or human subjects who are photographically transformed into virtual specters or automatons (such as the three swimmers presenting themselves for a mist-blurred lens in Kanalschwimmer, 1977 or the handshake and bow captured in Kunstverein Koln, 1979), Gelpke uses the unique technical language of photography to create evocative, emotional reflections of reality. Like all of the generation of contemporary Ger­man photographers, Gelpke, born in 1947, grew up in a divided Germany that faced huge chal­lenges of reconstruction after the war. He attended grammar schools in his hometown of Beienrode and in the industrial town of Rheydt, and second­ary schools in Rheydt and Krefeld. After various trade jobs and service in the military, and after developing an interest in photography, in 1969 he entered the Folkwangschule, Essen, where Otto Steinert, the instigator of the ”fotoform” group which practiced a highly abstract form of pho­tography (more generally known as Subjective Photography), taught. It was under Steinert that Gelpke’s style was formed, wherein vignettes of the world around him are excised and framed, so to speak. Within this style, Gelpke has produced rich and varied bodies of work. Series shown in exhibitions such as Sea Pieces, Plastic People, Sankt Pauli and published in books such as Sex­Theater, Fluchtgedanken, and the famous Der Schiefe Turm von Pisa demonstrate Gelpke works in the best documentary tradition, adding a dis­tinctive, intelligent visual rhetoric. In 1975, after working as a photojournalist for about a year, Gelpke was a co-founder of the Visum Photo Agency in Hamburg, now a leading stock photo and photographic agency. Andre Gelpke is a conservative in the pure sense of the word. Photography, however, is an immense store of forgotten and deeply hidden meanings. Because of its development throughout the entire culture, every photograph is full of symbol and meaning, which go unnoticed by most people in daily life. But the photographic work of Andre Gelpke is not merely a store of hidden emotional values; it also offers imaginative potential. This is why he at the same time is very much a progressive. He conserves and reminds us of not only the for­gotten or overlooked, but also creates, through his role as ”image designer,” new worlds, some of them perhaps even utopias. The works in the series Fluchtgedanken, completed in 1983, for example, largely feature people shot, obviously posing, from behind, thus hiding their faces, or from angles where the hair obscures the face. Each image is myster­ious, but taken together, the series evokes a palp­able sense of otherness, despite the straightforward, recognizable imagery. Gelpke’s early photographs are also often uniquely erotic, not in the conventional sense of depicting nudes or other accepted sensual material, but in his humanistic vision, which creates dense and evocative worlds within each of his compositions. Each series, moreover, is built up like a dream, where black and white shades, nuances of color, and intriguing compositional forms merge together and where one image spontaneously evokes another. In this sense, his work practice resembles that of the Old Masters, who were able to reproduce, in an enigmatic way, space, light, and depth in their paintings. Yet Gel – pke’s work is unmistakably contemporary and often refers to the modern photographic masters. Gelpke has said about his work: In this visual age, when our consciousness of reality is increasingly permeated by the actualities of television, photography, and advertising, my aim is to present the photographic-bureaucratic fact collector with a selection of my reality clipping form an only apparent ”pseudo – reality” and thereby to bring about a new questioning of reality. (Contemporary Photographers, St. James Press) At the end of the century, his work became more overtly erotic, and he has experimented with shooting in color, as in the series Fata Morgana. The series Amok and Familientag, while showing many of Gelpke’s characteristic composition and fram­ing, have the additional formal attribute of often startling, oversaturated, but still realistic color. For Gelpke, experiences are memories, signs, symbols, levels, and geometric forms. As such, he cannot “do” much with them; they are “nothing.” Only after the experiences become solidified in a photographic composition can he begin to change and modify them into a usable code system. He uses codification—spontaneously and impulsive­ly—to make the chaos of the world recognizable, converting chaos through his images into an elementary order. The Spanish photographer and writer Joan Fontcuberta wrote: Andre Gelpke tends to speak of two categories when referring to his work: the monologues (introspection) and the dialogues (relationships with the external). There is no opposition between them—they are complementary because they basically try to exercise two distinct types of vision upon the same reality: sensual vision and intellec­tual vision. (Contemporary Photographers, St. James Press) ” (Johan Swinnen) 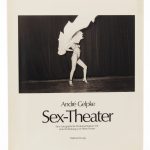