Akademia Ruchu: an experimental theatre company founded in 1973 in Warsaw. Akademia Ruchu (Academy of Movement) combine the genres of visual arts, theatre, and film in their performances

Edited by Małgorzata Borkowska and published Warsawa: wyd. Czarne Wydawnictwo – Akademia Ruchu ( A. R.), 2006. Large 4to in stiff wraps as issued. COMPLETE with dvd. 176 pages. Text in both Polish and English. Light edgewear, mainly top of spine and a small surface mark to backcover (from price removing mayby) else clean and fine copy

From the foundation in 1973 until 2014, Akademia Ruchu was led by Wojciech Krukowski. The company’s first performance was Collage (1973). After that followed Lektoraty (Lectures, 1973), Głód (Hunger, 1974), Autobus (Bus, 1975), Lekcje (Lessons, 1976), Wieża (Tower, 1975), and Życie codzienne po wielkiej Rewolucji Francuskiej (Everyday Life After the Great French Revolution, 1980). At the very core of the Akademia’s activities, lay – as one would expect, given its name – movement. The group’s premise was to break with classic pantomime or conventional scenic gestures. Its essence lay in the dramaturgy of movement and working on the so-called poetics of a common gesture. The physical actions of the actors were dictated by the play’s structure, which in turn was based on rhythm and space. This kind of system did not allow accidental movements. All of these elements combined would build up to a clear and simple model of communication. The Akademia’s performances could also be distinguished by the group’s departure from literary dialogues and narrative, as well as the lack of traditional dramatic characters marked by individual traits. Instead, elements such as music excerpts, sounds, singled out sentences or words, and anonymous characters would be introduced. One of the most acclaimed performances conceived by Akademia in 1970s is Autobus (Bus). Maria Bojarska described it as follows: “An illuminated, symbolic group of passengers of a speeding, ghastly bus. Stillness, which holds as much dynamic as the most spontaneous, lively movement – it is an image rather than a performance”. In developing their characteristic style of theatre, the Akademia members would reference poses and empty forms of social and political life. Such an approach was especially visible in their Życie codzienne po wielkiej Rewolucji Francuskiej (Everyday Life After the Great French Revolution), which came across as a reflection of the common behaviours of contemporary Polish citizens 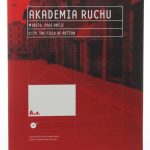