Important AARHUSRAPPORT – rare documentations from the fluxus art scene in Denmark, documenting a number of happenings, exhibitions and concerts taking place in and around Aarhus during the years 1961-1969: “In June 1969, Danish composer and Fluxus artist Eric Andersen presented an interactive artwork called By som værk (City as work) that connected different places in Aarhus in a complex composition through posters mounted on billboard triangles on the city’s squares and in bus stops, communication over walkie talkies and analogue cameras to document which places had been visited. The posters on billboard triangles simultaneously gave the audience instructions for their tour through the city and served as a log of which instructions had been carried out. This conceptual framework for a mapping of Aarhus resulted in an on-going and choreographed, but not planned or scheduled, performance as well as a series of photographs and inscriptions on the posters made by people following the instructions of the work as it guided them through the city. The composition was a way to connect people in different places, sharing information over the walkie-talkie with others on the same channel, but also a way to connect places with places, transferring a mark from one location to another. Eric Andersen writes about the piece, ‘A city is an instrument that doesn’t always have to play the same phrases. City as Work involved the entire city as an interactive artwork, through which visitors and local population could enjoy quite different urban routes and activities than the common and worn out ones. Printed on the inside covers of the original Århus Rapport are a number of photographs from Andersen’s project, contrasted by a black/white topographic map of the city of Aarhus on its outside. In other words, the map and images of specific sites of Aarhus are what holds together the different artistic practices documented inside the Rapport. It is an example of the avantgarde ‘politics of the ultra-local,’” (Lars Bang Larsen) 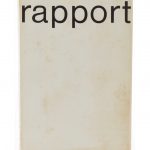