The Whole Earth Catalog was started by Stewart Brand following his summer 1968 tour of communes across the Southwest with mathematician Lois Jennings. Their Dodge pickup, laden with samples of goods for sale, became known as the Whole Earth Truck Store, and Brand’s first Catalog, its cover adorned with a colour photograph of the Earth seen from space, promised ‘Access to Tools’ and famously asserted that “We are as gods and might as well get good at it.” Rather than selling anything directly, he intended it to function as both countercultural toolkit and as a manifesto for alternative lifestyles. He organised it in several sections, most of them rooted in his road trip, including Understanding Whole Systems, Shelter and Land Use, Nomadics, Communication, and Community, each category providing detailed information on how to obtain a vast array of artifacts and merchandise

Influenced by the ideas of Buckminster Fuller, Marshall McLuhan, and cyberneticists Norbert Weiner and Gregory Bateson, Brand arranged the Catalog according to the principles of systems theory, and while it embodied his vision of small-scale technology as a tool for personal liberation and social change, its contents generally eschewed overt politics in favour of do-it-yourself individualism. Brand began operating as a cultural entrepreneur at the Trips Festival, and his interdisciplinary attempt to connect distinct networks and resources in the Whole Earth Catalog used a similarly holistic approach, epitomised by the geodesic domes designed by Lloyd Kahn and others, a Catalog staple that bridged the gap between science and the counterculture. Computers were not often featured (PCs were still commercially unavailable), but Brand already envisioned them as a potentially revolutionary technology, democratising access to information and communication, and his Whole Earth Catalog, with its densely-packed references and peer-reviewed content, anticipated the hyperlinked World Wide Web that followed two decades later 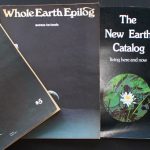